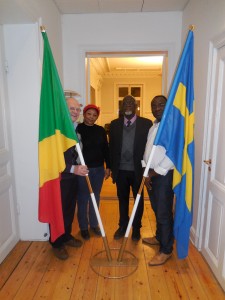 Monday, January 27 Bernt and I were invited to the Republic of Congo’s embassy in Stockholm. A well-initiated group of Swedes around Ambassador André Hombessa and Marius Billy has ideas on starting entrepreneurial education at the school Sueco in Point Noire.

The group wants to engage MSG in these plans. We had an interesting meeting and exchanged ideas. At the moment we can support with the educational materials we use in our training.

The meeting resulted in that one of the participants, Anders Hellgren, will more concretely formulate a plan of the education.

Last Wednesday, the Board had a meeting and among other things stated that the annual meeting will be on March 8 at Immanuel Church in Borås. See information under About us

Now we also begin detailed planning prior our trip to the Congo countries that is supposed to be in the latter part of March, and a few weeks into April.